You are here: Home > Triage Guidelines

START was developed by the Newport Beach Fire and Marine Department and Hoag Hospital in Newport Beach, California in 1983.

Modifications to START in 1996 by Benson et. al. substituted radial pulse for capillary refill, with a report of improved accuracy, especially in cold temperature.

JumpSTART, a pediatric version of START, was developed at the Miami, Florida Children's Hospital in 1995 by Dr. Lou Romig.

A modification was published in 2001. Formal scientific review of the efficacy of JumpStart has been limited.

JumpSTART is probably the most commonly used pediatric mass casualty triage algorithm in the US. 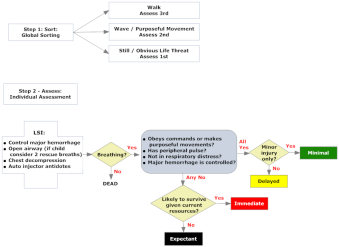 It was developed as a national all-hazards mass casualty initial triage standard for all patients.


PDF documents can be viewed with the free Adobe® Reader™